Recently I’ve been giving a few tips to first time 24 hour rider Ollie who is one of the three strong team at Pedal Progression in Bristol. For those who don’t know these boys are embarking on a massive journey to help develop the trails in Bristol and put back in to the community by committing to become a Community Interest Company. Anyway for more on that check out http://www.pedalprogression.com

As something of a skills exchange Ollie and Matt agreed to show an old dog some new tricks and take me out for an early morning skills season at Ashton Court. I’ve always fancied myself as decent on the downs having spent a few years pushing up hills in sweaty body armour as a younger gent and then many misspent summers in the ski lift assisted European alps. Although when the Lycra came to the fore and I discovered I was proportionally more skilled at suffering for hours on end that riding downhill fast I’ve somewhat lost some of the basics and balls that went with. Being able to ride downhill fast in xc is pretty handy after all faster descending skills=free money. Usually I hold my own at xc races on the downs but I was curious to see what the boys would make of my skill level and where some improvements could be made. I was really interested in particular to find out if any efficiency savings could be had as let’s face it, extra speed downhill is free money.

We started off with some basic body position assessment and from he off Matt’s style and guidance showed he didn’t just have the skills to pay the bills but was also someone who could explain things plainly without patronising. Matt had also done his homework and social media stalked some pictures of my riding position mid race. We both agreed that this wasn’t the best measure give some were taken deep in to endurance events when I was totally shagged so riding position might not have been top of my agenda! 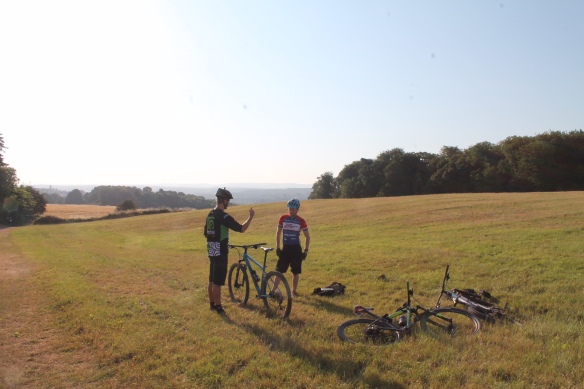 One thing that was immediately picked up was that my knackered racing body has my back in a funny position. Interestingly I hadn’t come across the benefits of riding with straighter legs before, one of the main benefits being helping you to pump through sections with your legs but also this in turn put my back in to a better position.

It felt weird on the grass but I was interested to see how this would feel on the trail. A few other tips and tricks were discussed before going across to test them out. The leg pumping was kind of tricky to get but by the end of the session I knew what I needed to do and I reckon this will help flow through trails quicker and crucially with less pedalling.

We set up some timing poles and interestingly my two timed runs were about the same time between trying to utilise the techniques used which felt way slower compared with a flat out attempt based on my usual riding style. At Pivot 12 hour recently I definitely felt a bit faster in general and the descents there are somewhere I have ridden quite a lot in the past so it felt good to squeeze out a bit more.

Give the boys and shout if you want some free money! You just have to learn how to waterski like Michael Jackson… (for those who know)