2018 is a year we will remember with sorrow for other reasons. After my gran passed away recently we also lost Mick my father in law just before my birthday. This happened the week prior to Pivot 24/12 where we had planned a family short break in the caravan. Priorities of course needed to be shifted with Sarah making another trip across to Suffolk where her family are based and I was left in two minds whether or not to do the race or not. Mick had been at last years 24 hour race supporting in the pits in the horrible slop and he loved getting involved in any event whether it be horse eventing or more recently coming along to bike races despite his poor health. Mick was a get on with it kind of guy so I think he would have wanted me to race. I wasn’t quite sure if my head would be in it though and there was a severe risk of my just having a mid race meltdown and sacking it off. I’ve been more upset that I imagined I would be as we knew he wouldn’t be with us in the long term but when it comes round it’s still a shock and I miss him dearly already. He was always there for us and was a fantastic father and role model. Having two daughters I was more than happy to fill the son role and he was always on the end of a whatsapp video chat as I crawled around under some rotten hole in our house advising us on various DIY nightmares. I really appreciated his interest in my biking racing and he even watched the live timing for 24 hour races when he couldn’t get to them. More than that he raised my wife Sarah to be the woman she is and in turn has brought us Rory, for that alone words of thanks aren’t enough.

Moving on, I decided to give it a go and get an early morning train back from Plymouth to Suffolk afterwards via a pedal on the race bike across London between train stations.

Fortunately the very kind and lovely O’cain family took me under their wing and drove me down in their rented motorhome (bonus). Ollie was doing his first 24 hour race and I’d been giving him a few pointers and I’ve really enjoyed getting to know him and chat about racing. His family were really supportive as well which is the foundation of any 24 hour event.

Ollie and me at our dream motorhome pit setup. He came 5th in open male on his first 24! I did joke his induction to 24 pitting was a luxury but then the weather made up for his getting off lightly… 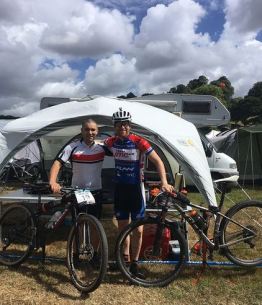 Ollie and me at our dream motorhome pit setup. He came 5th in open male on his first 24! I did joke his induction to 24 pitting was a luxury but then the weather made up for his getting off lightly…

As ever on arrival it was great to catch up with loads of mates. It was also a chance to chat about ‘A Lap of My Mind’ our planned charity cycle around the coast of the UK this year. More on that another time.

Alex one of the 10 Lap of My Mind riders rode to Plymouth from Essex as a warm up for the 24 hour race!

The weather forecast coming in was mixed to say the least which seems to be a running theme at this event. That on top of me breaking or bruising (still don’t know) my toe the weekend before added to the potential challenge/carnage.

Lining up on the start line there was the usual calm before the storm. I couldn’t help think of Mick not being there and had a tear in my eye already. Jesus I thought, what chance have I got of getting through the next 12 hours if I’m a wreck already. I had a word with myself and decided this ride would be for Mick. Any time I was hurting or wanted to throw the towel, I would think of him and his pains which put my little aches in to perspective and just crack on. The race started, game on, let’s do this I thought. We can talk ourselves in to and out of a race I think. I had just about clawed my mind in to it from the brink.

There was a good turnout in the 12 hour field and I knew buddy Chris Noble would be on good form despite his ‘I’m just going to enjoy it’ claims early in the week. My race strategy unusually was to try and hang on to him and then see what happened. The pace at the start was pretty full on but my body seems to be responding well. I’d only just recovered from a chest infection so it was good to have the lungs functioning again. The lycras were a bit tighter though with recent beer and chocolate feel better indulgences so the short sharp ‘mach’ climb made me feel like I was going to tip backwards! I felt great and strong on the descents though which let’s face it are the only reason we ride uphill. The course was a bit different from previous years but it was great mix of classic Newnham Park trails with something for everyone and some really fun downs. The weather started to get interesting pretty quickly and some on and off heavy showers at times made things pretty slippy. That was nothing though compared to the biblical conditions the 24 hour riders had to endure which prematurely ended the event early in the end. I earned my battle scars from 2017 on that front. 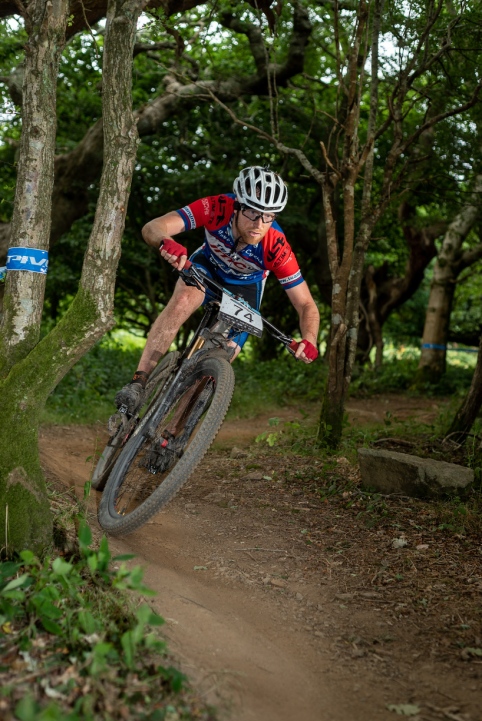 Sure enough Chris was at the sharp end looking strong so I followed. Then ensured some fairly high paced suffering for a few hours going back and forth as I hammered the descents to pull clear only to be dropped on the climbs. Some other fast vets like buddy Alan Colville were also in the mix so it was pretty tasty.

Eventually I just had to ease back as I was starting to cramp on the climbs, a sure sign I was pushing too hard. I was also pushing on the descents which led to a fairly high speed crash at one point leaving me a bit battered and a sore knee. I was glad I was able to mentally go hard as I was worried I might be a bit ambivalent.

Ollie’s family in the pits were great (thanks again!) although seemed a bit shocked at the speed at which I was taking the bottle hand ups the first time. I hadn’t really briefed them to say I wouldn’t really be stopping at all! It’s good to be able to have a name to shout to warn when you are coming in to the pits. Some of the other pit crews were probably slightly confused as me and Ollie shouted his dad’s nickname ‘Baggins’ throughout the event!

Chris slowly pulled out a lead but I was sitting in second for most of the race. Then until the 3rd to last lap where true to current levels of misfortunate my tyre burped and when I pulled out my gas to top up for some unknown reason nothing was coming out. I then pumped it up but on removing the pump it pulled the valve core out, arrrrgggh. All this meant I lost a load of time until Ollie turned up and we reasonably unsuccessfully managed to use his gas+tubeless foam can thing so that I could at least nurse it back to the pits. I assumed 3rd place Seb had overtaken me by that stage but I didn’t really have any info how far he was in front. I was pretty demoralised but tried hard to get my head back in the game and pushed again on the spare bike in a last ditch attempt to get back on terms blasting through the night which Exposure Lights booming through the woods.  I didn’t know what Seb looked like or what his number was so not sure I would have known anyway what I was aiming for. I was delighted that I had held it together and been surprisingly strong all things considered. 3rd place was pretty good still. 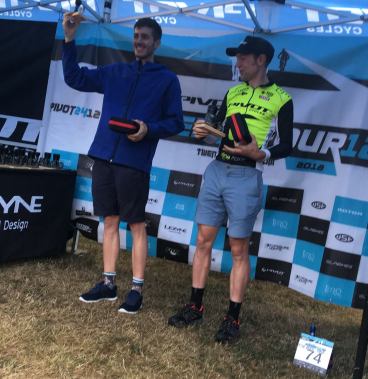 I was half way to Suffolk when the prize presentation happened so I couldn’t be there but neither could Mick who would have enjoyed the event.

Ultra endurance racing has a different flavour to other competitive sports from what I’ve seen. I think it’s summed up by what I heard from UK 24 Champ Max from the pit lane as we were going past “Come on Chris, come on Matt, oh I don’t know who to cheer for!” The fact that we’re all mates and just want to see each other do well makes me love this game. Chris’s dad was even cheering me on ringing his bell as I went past shouting my name, lovely.

Pivot 24/12 is such a feel good event. Coming over the line I just lost it. I usually have a mini teary moment at the end of a 24 with the outpour of emotion but this time the whole last few weeks caught me up and consoling hugs were dished out by the MC legends duo of Rory Hitchens and Matt Carr (thanks guys). Normally I can’t stomach a beer at the end of a race like that but this one went down well, I needed it. Thanks to Mark @exposurelights for the hand up.

So I write this sat on a 5 hours journey to be with my family for a few days. Onwards and upwards please now 2018 you big horrible bastard of a year.

This one was for you Mick. 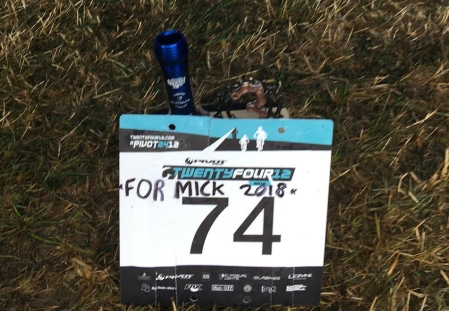 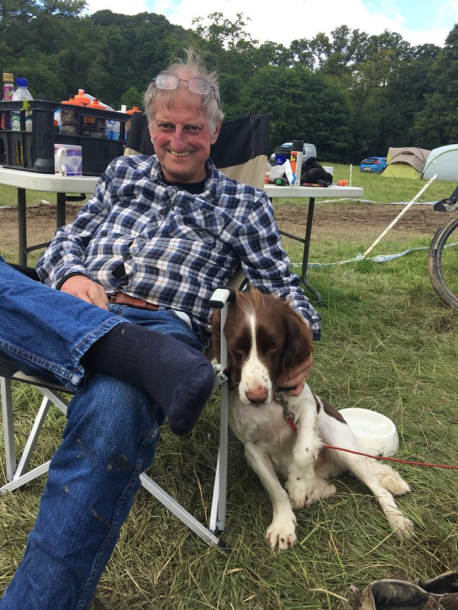